Fuel cell powered taxis date back to the late 1990’s when Zevco Ltd. built three for London’s roads – one of which remains at the Cygnus Atratus R&D HQ.

The technology worked and made waves nationally and internationally, so why aren’t we all hailing fuel cell powered taxis today? Compressed hydrogen is the problem.

This expensive gas powered the original fuel cells and the hope was that prices would go down. They didn’t, and hydrogen fuel cells remained too cost-prohibitive for widespread use. Ethanol, on the other hand, is already cheap and is getting cheaper. It’s made – quite literally – from trash.

Our novel technology transforms waste into an energy-dense liquid fuel that’s easy to produce and distribute and is significantly cheaper than diesel.

We’ve partnered with renowned taxi company Frankum and Kaye to recycle redundant existing vehicles into the world’s first remanufactured taxis running on waste reformed fuel. Mechanical and operational design is overseen by engineering academics from Imperial College and the University of Liverpool to ensure the
driver, the customer and London get a compromise free vehicle. 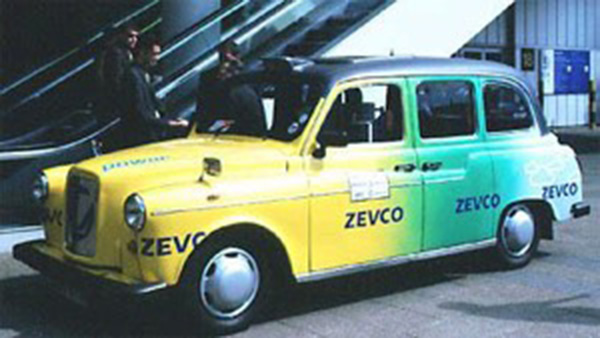 The leader of the team is Sebastien Appleby, an international banker with a difference. He loves fuel cell and grew up receiving one for birthdays and Christmas since childhood. His father Dr. John Appleby is the world’s foremost fuel cell expert.

Luke Evans MsEng, is the project director. He has been working with Cygnus Atratus Limited, building the future of hydrogen powered fuel cell technology for communities in unique Collaborative Manufacturing Enterprises (CME’s) that will soon be powering British homes at cheaper than generated grid electricity.

Alexander Kaye is a principle of Frankum and Kaye Ltd., one of London’s best known taxi firms. Alexender will be the taxi construction, maintenance and commercial director putting rubber on the roads. His experience in the taxi business is without peer. He is the London Taxi.

Thomas Holmberg is an internationally renowned commercial director with an abundance of experience in logistics, materials, purchasing, sales and administration and a driver of Cygnus Atratus.

Dr. Hugh Middleton is a renowned fuel cell expert and materials scientist and one of the Directors of Cygnus Atratus. His papers and scientific achievements are legion and his work on the EFC is fundamental to its success.

Dr. Rob Fenton, is best known as a former Research Director at GSK and the Institute of Biomedical Engineering, Imperial College, London. Despite being an expert in pharmaceuticals, he is devoted to  bio-chemistry, making him the expert on all things alcohol. He is an accomplished scientific Project Manager.

Nicholas Abson has been working with Cygnus Atratus for six years helping develop the technology and see it to its completion. He was the builder of the first London fuel cell taxis and former Chairman of ZeTek.

Dr Shaun Crofton was Senior Lecturer in the Mechanical Engineering Department at Imperial College. He is also a veteran car enthusiast and innovator. He brings vehicle design and advanced novel motor mechanics expertise to the team.

Jean Aldous is a veteran fuel cell promoter, publisher of Fuel Cell Newsletter and has been a lobbyist for the technology for over thirty years. She brings a wealth of knowledge of Government projects and the fuel cell business.

To find out more, get in touch.